I was born in 1960. Beginning when I was just four years old, a forty-two year old man, Gene Hartman, a very close friend of my parents, repeatedly sexually abused me. The abuse lasted over three years. Gene then committed suicide several years later. Shortly thereafter, his wife Eleanor called my home. I had the misfortune of answering the call. He’s dead and it’s all your fault she said.

Childhood sexual abuse is a prison without bars. It has lurked in the shadows of every important decision I’ve made throughout my life, both the good as well as the bad. It became the lens through which I misjudged men; the source of mistrust, the wellspring of shame.

The 1960s were not the most enlightened time for preventing and prosecuting this crime. Recognition of childhood sexual abuse was minimal at best, and misinformed as well, beware of strangers for instance. Little credence was given to sexually abusing parents, teachers, priests, coaches, boy-scout leaders, relatives, friends of the family, doctors or lawyers. The list is long and notorious.

I didn’t have parents who could psychologically handle a traumatized child either; they could barely take care of themselves. I spent hours in my bedroom, often hidden in the closet, with a pillow jammed over my head, trying to drown out their arguments. When I experienced recurrent and terrifying nightmares, and sought comfort in my parent’s bedroom, I was beaten for the intrusion.

I had an endearing kindergarten romance that ended abruptly. The veiled implication was that I sexualized it. Perhaps I did. The accusation has a ring of truth to it.

My parents and sister were afraid of me. Usually quiet and complacent, my goal was to be invisible. If I wasn’t seen or heard, I’d be left alone. If pushed too far however, I would explode with rage. These angry outbursts were not uncommon.

As a teenager, riding horses was my escape. My horse trainer Penny was the first of a short list of mentors who encouraged me. I needed it terribly. I rode the hills alone, screaming and crying. I was mad, absolutely mad.

I never got the revenge I wanted, killing Gene, or at the very least, seeing him behind bars. His suicide cheated me of the justice I desperately needed.

It’s also perhaps no surprise that I was easily manipulated into sexual activity with peers and older guys too. I lost my virginity at 13.

When I was 17, I dropped out of high school and moved in with my boyfriend. I altered the year of birth on my birth certificate, and took off on the back of his motorcycle to Las Vegas. Heart pounding, I handed the forged document to the Clark County courthouse clerk. After looking me up and down, surely knowing something was amiss, she nonetheless issued me a marriage license. I secretly wished she hadn’t. I just wanted to get away from home.

When the marriage ended two years later I began to drink heavily. I had a fake ID for that too. I snorted cocaine in the bathroom while working for the Post Office. Too drunk to drive home, I’d leave bars with young men I met while dancing. My self worth was in the gutter. I had a brief affair with an art professor twenty years older than I.

I didn’t disclose the childhood sexual abuse until the night of my 21st birthday. As a newly minted adult, with many drinks behind me, I finally found the courage to let the bitter truth out.

My parents were surprised. Though they knew that Gene was sexually abusing children, and that he had killed himself in fact, they never apparently put two and two together, despite being mindful that I had spent sleepovers at his house.

Or did they? If so why didn’t they talk to me about this when I was a child? They never even bothered to ask me if I was a victim? These questions have a plagued me throughout my life.

When I saw my first therapist, a female psychologist, shortly after the disclosure to my parents, she told me that sexual abuse isn’t always harmful- it could feel good in fact; the genitals are erogenous zones. I then walked. A decade later I gave therapy a second shot; I needed to heal. Some therapists were warm and supportive while others were shallow and perfunctory. The last time I went to therapy, eye movement desensitization and reprocessing (EMDR) was purportedly the answer. Moving the eyes left and right, I was told, would alleviate profound trauma. I didn’t buy that either. 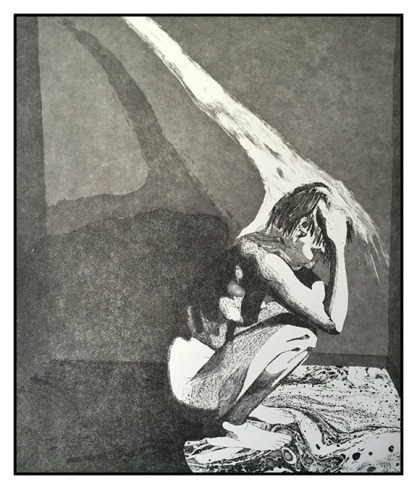 I continued to struggle, and then struggled again. Chronic childhood sexual trauma was like an aggressive cancer, eating everything in its path. Pedophiles and sexual predators alike can recognize an easy target, and they found one in me. A long list of poor choices, sexual harassment and assaults, filled me with anxiety and depression.

I made my way through art school with a supportive boyfriend who then became my second husband. Later, pursued by a much older grad student, I allowed myself to be convinced to run away to Europe with him after completing my MFA. It was a disastrous decision. Throughout the trip, I contemplated suicide, and then when I returned I was left with nothing. My second marriage ended and I was emotionally shattered again.

I drank a lot at this time too, and began cutting my arms with an x-acto knife. My art projects were devoted to smashing things. I felt broken.

My resilience however came in two forms. Hard work and dedicated career planning, particularly in the fields of art and environmental activism, as well as the shard of hope that someday I’d be listened to, cared for and accepted.

But I’m different. I’m not easy to understand. It didn’t help that I didn’t like to talk about myself. I was too ashamed. Unlike everyone else, I couldn’t seem to access happy stories of childhood, or fun experiences in high school and college. They existed, I’m sure of that, but were overshadowed by the darkness of my past. I was damaged goods.

When I joined a group of young artists taking part in a performance piece at MOCA, my then to be third husband asked, Why would you tell strangers about your childhood sexual abuse? That comment, and many others like that from him convinced me that my life story wasn’t worth telling. This marriage ended in divorce too.

There were more bad relationships over the years, each one igniting a small fraction of the overall dream. Though I desired acceptance, love and support, I didn’t believe I deserved it, so I’d simply invent whatever was missing, only to experience failure yet again.

For every poor relationship choice, there were also corresponding responsible life decisions. Home ownership, creating art in the studio, cultivating an organic garden and experimenting in the kitchen, travelling, reading f

or pleasure and insight. I fought like hell for stability.

I continued working like crazy. I stayed extremely busy, in part, to avoid thinking about how the childhood sexual abuse still had a tenacious hold over me. How could I go on I wondered? Contemplating suicide on occasion because the pain was so overwhelming – shame for what happened to me as a child, or shame over the bad choices I made as an adult. Either way, certainly when depressed, I felt like I’d already lost my chance for redemption.

It takes balls – and I’ve been told I have them – and insight, to accept, love and forgive oneself.

It’s not been all doom and gloom fortunately. I have a spectacular relationship with my teenage daughter and an amazing fourth husband who is everything I’ve ever dreamed of, supportive, loving and healing. As fate would have it, he’s a professor of psychology at UCLA.

I’ve also been able to fulfill my childhood dream of being an artist. I got an MFA from a very good program, Claremont Graduate University, and then found economic stability in the visual design world. I’ve also been able to pursue my passion for environmental and human rights causes too, first through my art and work, and presently through Planting Seeds Now. 50 Years Later is one of those seeds.

My husband and I have a term for describing my suffering – going into the abyss. It’s a place where I spin uncontrollably in a cycle of self-loathing, depression and disassociation. I tend to go there when I feel ashamed. Fortunately he’s now capable of pulling me out of it. Still, even today, the abyss – and all that it stands for – haunts me.

Though, in the balance, I consider my life to be a success, it’s nevertheless 50 years later, and I’m still not free of this painfully long shadow of childhood sexual abuse. I’ve also finally come to realize that I have a story worth telling.